The two pie charts below show some employment patterns in Great Britain in 1992.
Summarise the information by selecting and reporting the main features, and make comparisons where relevant.

The task is taken from ielts-exam.net

Both of the presented pie charts depict the labour market situation in the United Kingdom in 1992. The data is given in percentage terms.

As a general trend, we can see that the large majority of women and men are provided with jobs in a non-manual sphere, such as management and works which require certain professional skills (29% and 36%,1 respectively). Also, there is some crossing in the amount of respondents employed in other manual, non-manual and general physical jobs. As regards alternative hand-operated works, female employees account for 27% and male ones constitute 26%, as for non-manual works, 9% for women and 6% for men. With reference to the general labourers, the indices are almost equal. However, statistics differ in case with craft activities. Males are reluctant2 to this kind of labour (24%), while females are more likely to become white collars, constituting only 3 percent of the total number of employed women.

To sum everything up, even though the employment tendencies of british3 employees distinguish among genders, particular points are overlapped.

The mistakes in this piece of writing are few and far between, they do not impede communication of the main idea. The structure is a little bit unorthodox with one dominating body paragraph. However, such approach does not stand in the way of understanding, as there are no issues with either cohesion or coherence of information. Great job!

The diagrams below show the design for a wave-energy machine and its location.
Summarise the information by selecting and reporting the main features and make comparisons where relevant.
You should write at least 150 words. 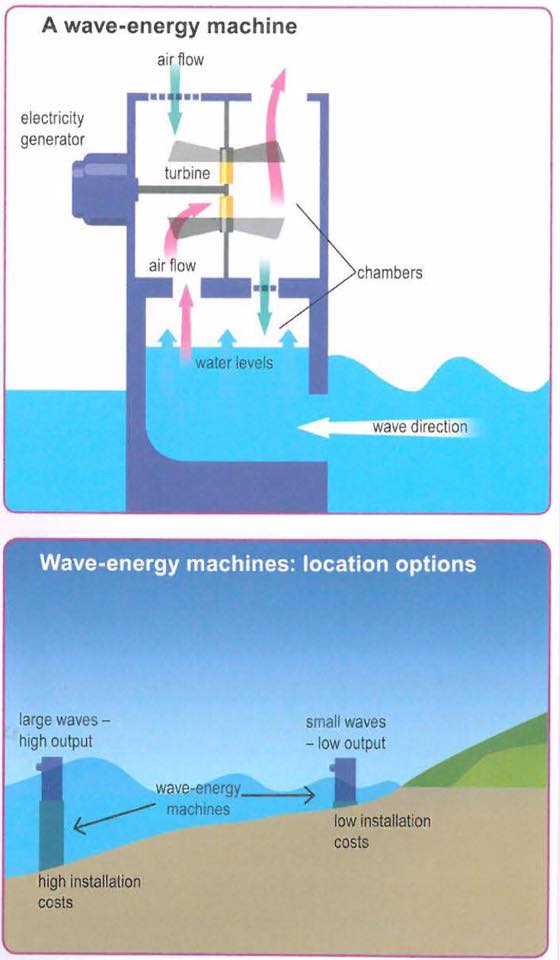 Energy can be produced by using an Input Source such as Wind, Water or Wave. Wind Energy has been widely used since the 1980s and is evident by the increase in the number of Windmills across the world. Lately, Researchers have shown that a Wave-energy Machine can be three times more effective than a Wind Energy Machine. At first glance, the design of the wave energy machine may appear complex however the description of its inner workings detailed below will help a Reader understand it better.

As the name suggests, Wave Energy Machines depend on Wave as its Input Source. With the wave energy machine installed in the seabed, the wave direction is taken into consideration. As the water levels rise, the chambers located in the Wave-energy machine push the airflow upwards. Through the Air Duct located at the top, further air is pushed towards the Turbines. This increased airflow pressure causes the Turbines to rotate. The rotating turbines generate electricity which is in turn passed through the top Chamber to the Output Source.

The Location of the Wave Energy Machine plays a significant role in the amount of Energy that is produced. Larger waves produce high output whereas small waves produce low Output. It might seem obvious to then install Wave-energy machines in areas where there are large waves. An important point to consider however, is that Wave-Energy Machine Installation in areas with high waves incur high installation costs. So selecting suitable locations for Installation needs a thorough cost-benefit analysis upfront.

To conclude, a Wave-Energy Machine Installed at Suitable Locations and designed well can be extremely beneficial in generating high energy.

I will have to deviate from my usual point-by-point analysis for this essay. It is virtually mistake-free as far as I can tell, but there are two things worth noting.

First and foremost, the introductory paragraph is unneccessarily long and it includes something that shouldn’t be there – so-called ‘analysing’ on writer’s part. You shouldn’t add any information that is not directly related to the chart/diagram you’re writing about. In this particular case I would keep the last sentence and add another one before it.

The second issue is Capitalised Words. There is no need to capitalise ANY of the words in this text. This includes parts of the diagram too!

Overall, this writing is spotless both grammatically and lexically. It is well-structured and the contents are one hundred percent relevant to the task. Well done!

This website uses cookies to improve your experience while you navigate through the website. Out of these, the cookies that are categorized as necessary are stored on your browser as they are essential for the working of basic functionalities of the website. We also use third-party cookies that help us analyze and understand how you use this website. These cookies will be stored in your browser only with your consent. You also have the option to opt-out of these cookies. But opting out of some of these cookies may affect your browsing experience.
Necessary Always Enabled

Any cookies that may not be particularly necessary for the website to function and is used specifically to collect user personal data via analytics, ads, other embedded contents are termed as non-necessary cookies. It is mandatory to procure user consent prior to running these cookies on your website.